What is Bell’s Palsy?

Bell’s palsy is an unexpected occurrence of facial muscle paralysis or weakness. This is a neurological disorder affecting the 7th cranial nerve, also known as the facial nerve. If the facial nerve gets affected where it exits out of the foramen in the skull, it is called Bell’s palsy. It is named after Sir Charles Bell, a Scottish surgeon, neurologist, and anatomist who lived from 1774 to 1842.

Typically, pain and discomfort occur on one side of the head or face. Bell’s palsy can affect people of any age. Pregnant women and those with diabetes, influenza, a cold, or another upper respiratory condition are most susceptible. Bell’s palsy equally affects men and women. Bell’s Palsy can be caused by idiopathic, traumatic, neoplastic, congenital, and autoimmune factors, as well as viral illnesses caused by viruses like the Herpes zoster virus.

What are the symptoms?

The following are some of Bell’s Palsy’s  most prevalent symptoms:

The mainstay of treatment is early intervention with steroids and antiviral drug therapy. Physiotherapy is also an ideal way to treat Bell’s palsy and facial palsy. Physical therapy would include facial expression exercises, facial muscle massage, and stretching. Since facial expression is a combination of both sides and about the symmetry of both sides, we need to stretch the affected side because the affected side may pull. Facial massage and stretching will help improve those affected muscles. Also, surface electrical stimulation has no adverse effects. Electrical stimulation can help people get better if they are diagnosed and treated early on.

There is a window of time after an initial injury when the muscles of facial expression are still salvageable. Hence, do not delay your treatment and lose your beautiful facial expressions forever.

At River Physio, we can save the natural muscles that make expressions and bring back the ability to blink if we catch the problem early and time the treatment right. 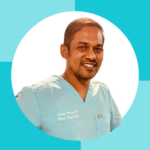